ER: Learning exercise on the Implicit Principles of CDT

This is a detailed experience report on a learning exercise I completed recently, following my post about James Bach‘s opening keynote at Let’s Test Oz (LTO) 2014:

…There was one slide in particular which I could’ve questioned James on for another hour, called Implicit principles of the Context-Driven School of Testing. This slide contains ideas which could fill a book, if James had time to write another book.. I think I need to read some more books before I can fully fathom the concepts presented! The beauty of this conference is that I have many opportunities to find James in the hotel and ask about this slide in more detail…

On day 3 of LTO I tracked down James and we spent the better part of an hour walking through these principles. Please click on the image below and take a moment to review them in detail.

At first glance I found these Implicit principles intimidating. In hindsight, I’ve attributed this to 3 main reasons:

2. The principles include words which I couldn’t define, such as primacy, non-linearity, cybernetic and authorship. I’ll define these simply here, in my own words:
Primacy – Most important
Non-linearity – Unpredictability
Cybernetic – React to observations
Authorship – Creation

3. I couldn’t understand the reasons behind the creation of these principles. If James covered this in his talk then I missed it. I was wondering what was wrong with the original list of seven basic principles (shown below). I wanted to understand not just the new principles themselves, but also the need for them, and the thought processes that went into creating them. As an aspiring CDT practitioner, understanding this process of articulating the CDT approach is important to me.

While discussing these principles with Anna Royzman over dinner, I mentioned that the new list seemed unapproachable for the masses. Anna agreed with the need for a shorter and more simplistic version, which I’ve called the marketing version. Anyone reading the marketing version and looking for more information could read the full version of these principles to find out more context and detail.

I approached James about this on Skype and offered to create a first draft for review, to get the ball rolling. James disagreed with the need for a marketing version of the principles, but he did agree to support me in the process of creating it. I was quite confident in the need for a new version…

Draft 1 of my marketing version

I have to remind myself now that I was proud of this version when I initially created it, while the ink was still wet. I felt that I’d captured the key points from James’ 10 Implicit principles and presented them in a user-friendly way. Here’s what I came up with:

I sent this list to James for review, and we started to review point 1 together. Based on James’ questions and comments, I had a basis to further review my own work. These are my brief notes from that review.

Self-review 1:
1.
2. ‘Facts based on evidence’ doesn’t seem to tie in with heuristics.
3. No longer sure that this sentence makes my point clear
4. Therefore… what?
5. I want\need to do this, it’s not just a duty. This sentence [as written] currently applies to everyone in the company…
6. Sounds like I’m describing Agile testers. “The team” – which team?
7. This point isn’t terrible.

This version is vacuous. I’ve abstracted too far, it could almost be describing procedure-driven testing. Start again…

Taking a Step Back

During Skype coaching James posed the question, “If you had to tell someone a few things that would get across to them the *gist* of CDT what would that be?” This expanded the learning exercise for me, as I’d have the freedom to create a whole new list, rather than devising a simplified version of the 10 implicit principles.

I decided to first work out which concepts were lacking in the 7 Basic CDT Principles, in order to understand the need for the 10 Implicit CDT Principles. I came up with a working list of the differences (shown in the image below, initially without the information in italics). 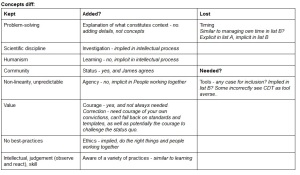 While reviewing both lists so closely, I gained a greater appreciation for the initial list of principles. I really started to doubt the need for a new short version, and I also doubted whether my creation could come anywhere close to the original.

When reviewing some of the differences I’d identified with James, he said something very interesting. His updated list of 10 principles was not intended to replace the original list! Therefore the original list still stands, and my marketing version is redundant. The new list was designed to clarify the implicit concepts which were behind the creation of the original principles.

The implicit principles were created by the main principles…
… I wrote the ten by asking myself what did I mean by the seven and what must necessarily be true to achieve them.

This was my aha moment. Now I understood that there was no need for a new short list. The original list was not being replaced at all, only expanded upon in more detail.

Although I’d started out on a fool’s errand due to a misunderstanding, this turned out to be a productive learning exercise. I can now speak confidently about the principles of context-driven testing and will continue to champion them. I’ve suggested two changes to James which he has agreed with. The first was the re-introduction of the concept of software solving a problem. The second is that community status was not implicit in the original principles and has been added in this new version.

This exercise has prompted me to finish reading Thinking, Fast and Slow by Daniel Kahneman, analysing my own thought processes.
And finally, it helped me to “keep my brain sharp” between contract roles.

I remain concerned that the complex language used in these principles will hinder the widespread communication and adoption of the concepts.

My concerns are valid, according to this paper by Daniel M. Oppenheimer – “Consequences of Erudite Vernacular Utilized Irrespective of Necessity: Problems with Using Long Words Needlessly”. Essentially, as the level of complexity increases the text becomes harder to understand and less likely to be accepted by the reader.

…there are many times when a long word is appropriate, because it is more precise or concise…

What are your thoughts?

Are precision and brevity (conciseness) more important than first impressions in this case?
Does the original set of principles serve the needs of newcomers adequately, lessening the need for the new version to be approachable?

Posted by Kim Engel on October 7, 2014 in Software Testing

4 responses to “ER: Learning exercise on the Implicit Principles of CDT”